At the ION GNSS+ 2018 conference, I presented a paper based on a joint effort between NRCan and Swift Navigation on network modelling considerations for wide-area ionospheric corrections. Both organizations had similar questions regarding this topic: what is the recommended station density to reach cm-level ionospheric corrections? And is it better to use a 3D model or a per-satellite model? This blog post summarizes our findings.

While it is known that network RTK can produce accurate differential ionospheric corrections, there are several limitations associated with this method. First, a network adjustment is often required to fix ambiguities between reference stations which can become complex over large areas. Second, corrections are typically provided independently for each satellite which is not necessarily optimal since physical correlations exist among them. Finally, most RTK networks have inter-station distances of 50-100 km, and it is not realistic to operate a wide-area correction service over CONUS or Canada with such a station density.

Following from these considerations, we were curious to know if other modelling approaches could lead to centimeter-level ionospheric corrections. To answer this question, we focused on three variables:

Using permanent stations located in CONUS, we defined the three following networks, with black triangles being reference stations and red stars being users (the same for all three network configurations): 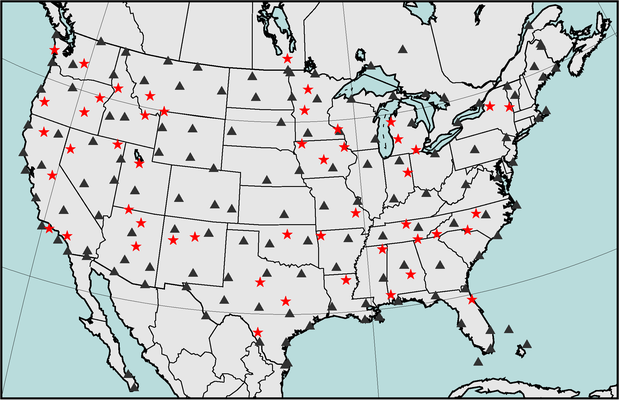 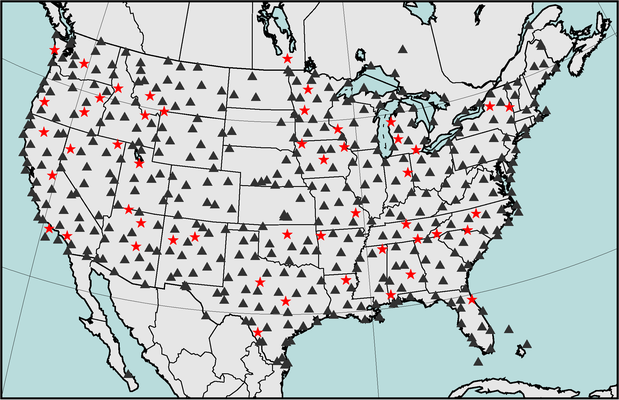 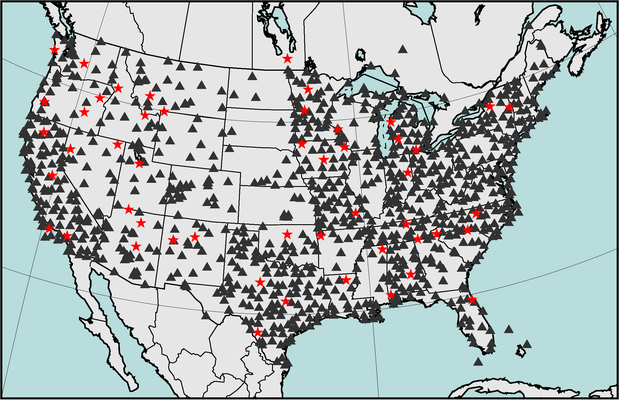 We then processed all reference stations using both PPP with float ambiguities and PPP-AR. The former provides slant ionospheric delays at the centimeter level, while adding ambiguity resolution yields very precise delays of comparable precision as network RTK. These slant ionospheric delays were then fed into the three models tested, giving a total of 18 combinations (2 observations x 3 models x 3 network configurations).

The following figures show the results obtained on 27 Feb 2014, which is close to the solar maximum and was subject to a certain level of geomagnetic activity (Kp index around 5-6).

Let us look at the impact of each variable separately. By comparing the left and right plots, we see the impact of ambiguity resolution on the input observables. As expected, the better the input observables, the better the ionospheric predictions. This is especially true when the model used is accurate, i.e. with the per-satellite or dual-layer models.

The single-layer model, represented by the red curve, is definitely not as accurate as the other two models due to its incorrect assumptions (fixed shell height, mapping function, isotropy). While both the dual-layer (blue) and per-satellite models (green) seem to perform very similarly, there is a subtlety to understand here. We used Kriging to compute ionospheric delay predictions at user locations, meaning that no model parameters (such as electron density in voxels) have been estimated in our tests. It is only the covariance functions representing the correlations between two signal paths that impact the predicted delays. Hence, even though the covariance functions are different for both models, they will both assign a strong weight to signal paths traveling through the same region of the ionosphere. Knowing this, we understand why both models perform similarly. Interestingly, it looks like considering correlations between satellites, as done in the dual-layer model, is slightly detrimental to the interpolated delays.

Finally, it shouldn't come as a surprise that the sparser the network (as represented using the x axis in Fig 2), the larger the errors in the predicted slant ionospheric delays. However, the RMS error only increases by about 10% when going from a 75 km to a 150 km network, although part of this result could be explained by the mean distance from users to reference stations being slightly larger than 75 km in the first case, and/or slightly smaller than 150 km in the second case...

What's the bottom line? Well, the approach used in network RTK (dense network, per-satellite model) provides the best performance and is the most computationally efficient. No surprises, really. The main advantage of the dual-layer model is that it can harness correlations between systems, i.e. GPS could help in deriving slant ionospheric delays for other systems such as GLONASS (plagued by inter-frequency biases) or Galileo (with a sparser network at the moment). But the proof is in the pudding, of course!

If you want more details on this study, please refer to the ION GNSS+ 2018 proceedings.